I recently saw this tag over on Annmarie’s blog, The Small But Mighty Ramblings of a Redhead, and I am always posting photos of my two dogs on Instagram & Twitter so I thought I would do this post about them!

1. What are their names?

Muffin is the first dog that we got. She is a Teacup Pomeranian crossed with a Miniature Jack Russel so she’s not very big.

Persie is our new puppy, he was born in December and he’s a Short-Legged Jack Russel. 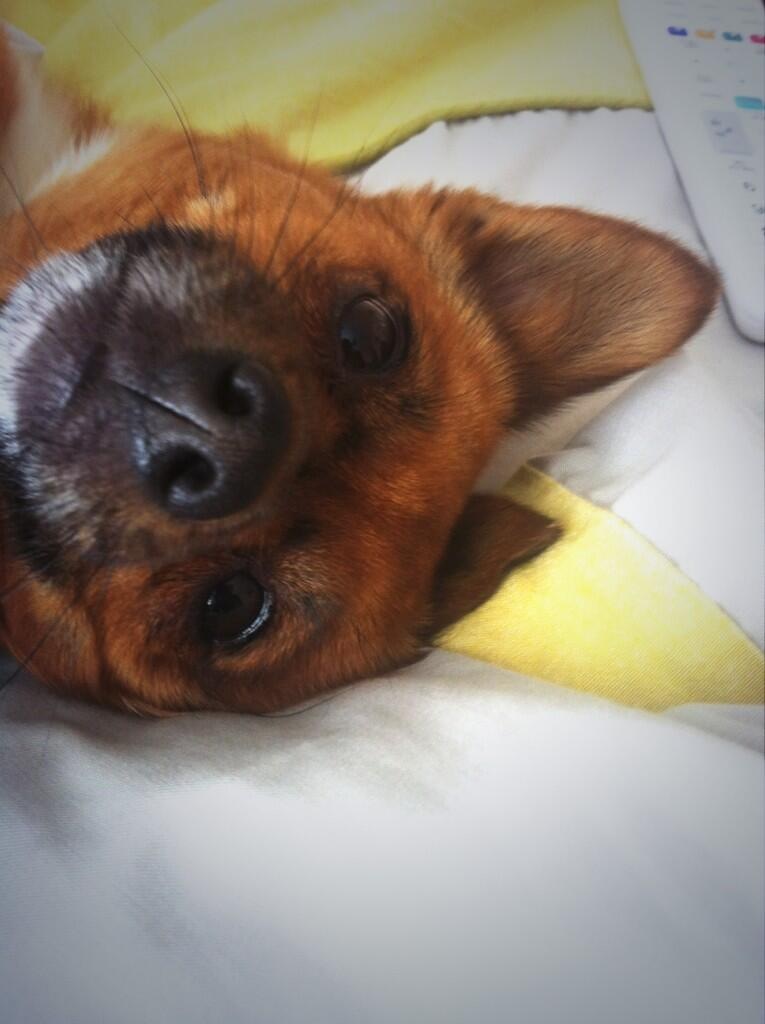 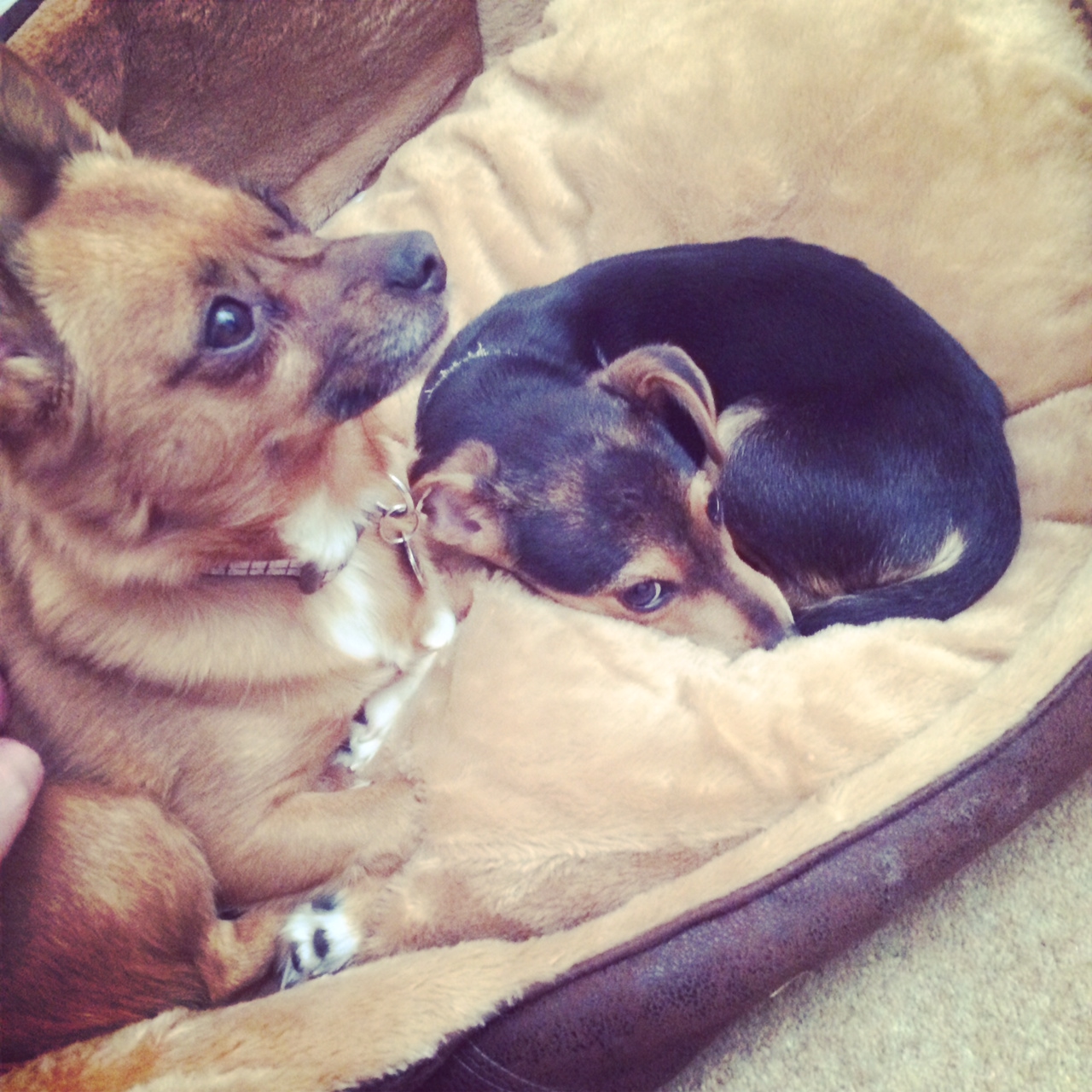 Muffin & Persie getting along for once…
2. When did you get them?

We got Muffin in August 2010 and we were actually about to go on holiday to New York for my Mum & Step-Dad’s wedding so we had her for a couple of weeks, gave her back to the owners for whilst we were on holiday and then collected her when we got back!

We got Persie at the beginning of this year just after we got back from Colorado. We had been thinking about getting another puppy for a while and saw him on a website and he looked so cute and wished he was still there and luckily he was! 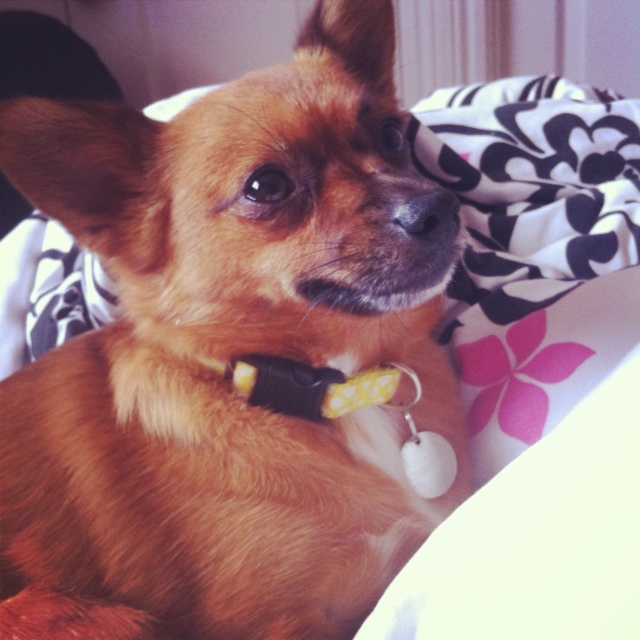 She’s a poser when she wants to be but often looks away when we try to take photos of her!
3. What is something they do that annoys you?

Okay, when we first got Muffin she would always steal our knickers if they were left around our room. Now she’s older she doesn’t do that anymore but Persie does. And boy oh boy does Persie get them. He chews them to pieces! I’ve had to go out and buy more underwear because he must have ripped at least 10 pairs of my knickers up!

4. What type of breed are they?

Muffin is a cross Teacup Pomeranian & Miniature Jack Russell and Persie is a Short-legged Jack Russell.

5. Have they ever had a near death experience?

Persie actually has had a couple in the past month or so. He managed to escape under our fence! We only just had it put back up because it blew over in the horrendous wind we had last month but there was a space underneath where there was no concrete and he buried underneath and through all the gravel and escaped. There is just a field out the back of our house as there used to be a school there that is now knocked down. Luckily, the neighbours were painting their fence and they caught him and brought him back! We hadn’t even realised that he escaped because they were both just playing in the garden. God knows if we would have found him if our neighbours hadn’t been there. Oh and also he ate half a big bar of chocolate a couple of weeks ago when our boiler burst and we had to take him to the vets to be sick! Not a nice experience and he still tries to eat our chocolate so he hasn’t even learned from it! We are good owners I promise he’s just a naughty puppy!

6. Do they know any tricks?

Muffin can do hi-5s and give us her paw. She also knows when we get home as she recognises the cars and comes running down! Persie is still little and is only just getting the hang of ‘Sit’! He is a little devil. We have to feed Muffin first and then make Persie wait as he gobbles his up so quickly that he still finished before Muffin and tries t eat her food too! He’s a greedy one!

7. Do they love to snuggle?

Persie loves snuggling when he’s tired and he always sits on your feet whenever he can. I’m not sure why?! Maybe he doesn’t like the cold floor but he loves just being next to you. Muffin used to love snuggles but she’s still getting used to having another dog around and can get jealous so she just gets really narky when you try and cuddle her but she does love them really! 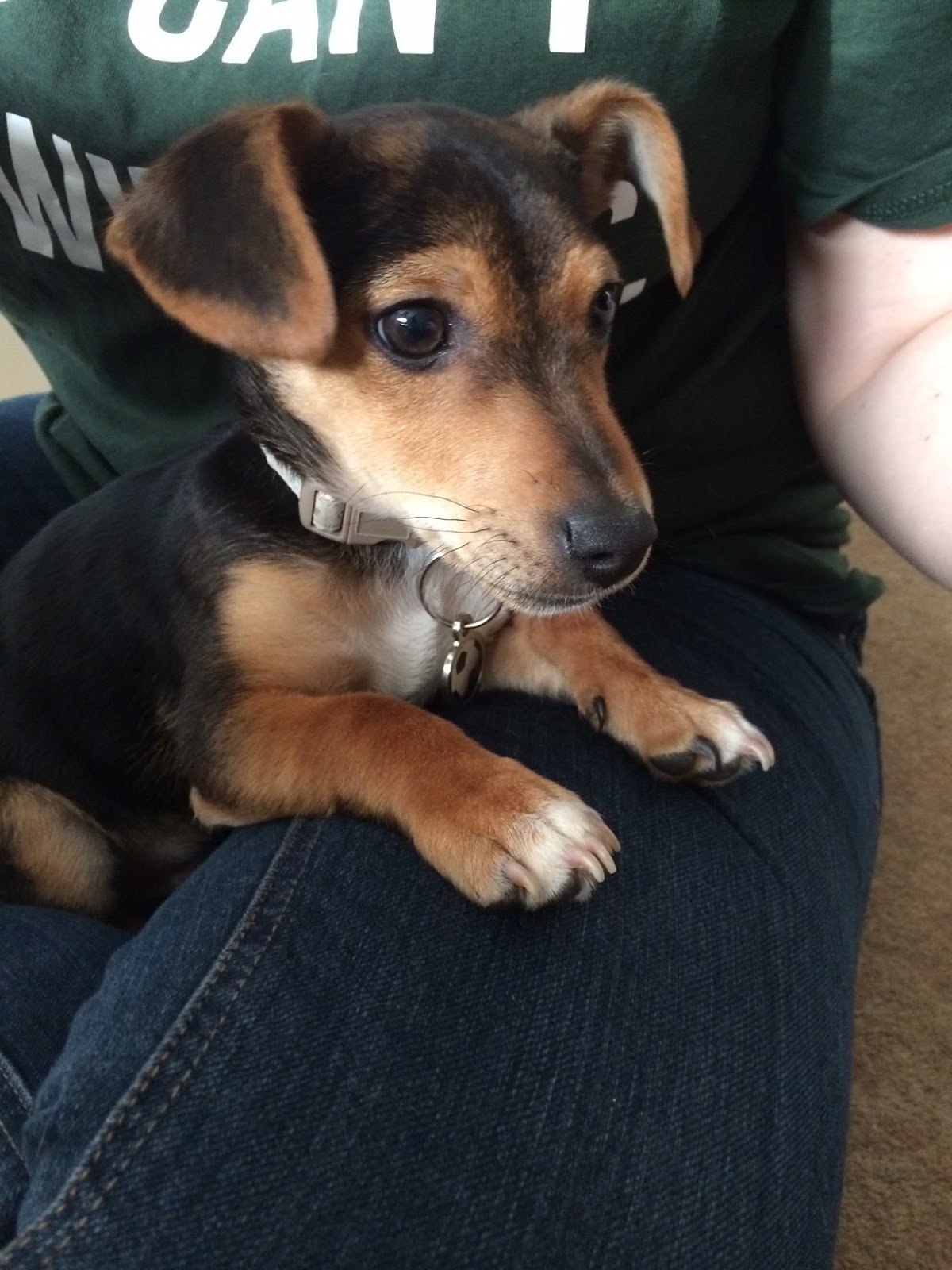 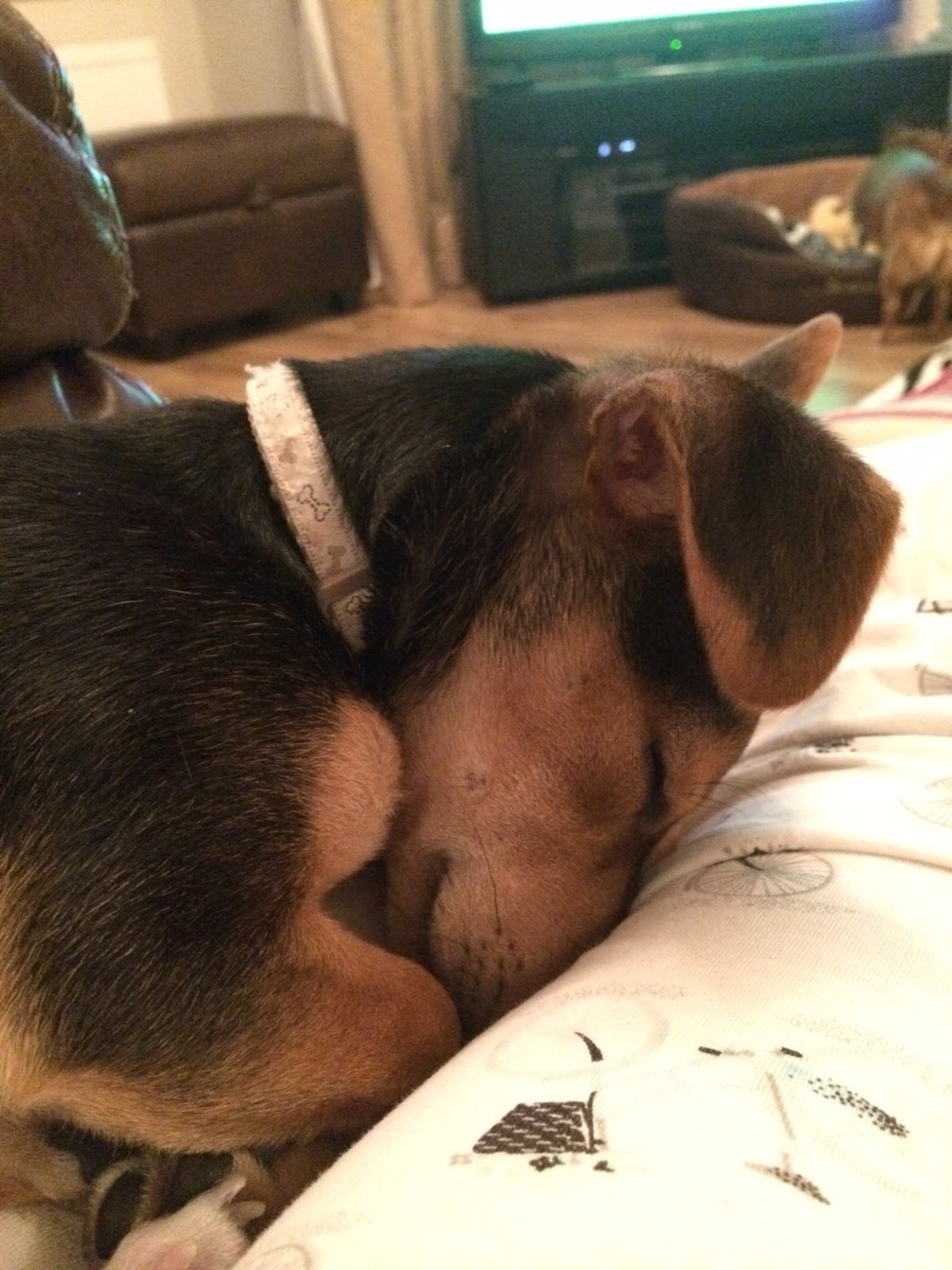 We bought after seeing them advertised on websites.

9. Do they get along with other dogs?

Muffin doesn’t really like other dogs. Our neighbours have dogs and Muffin always barks and looks through the holes in the fence when they’re in the garden. Persie hasn’t really had much experience with other dogs yet.

10. Do they get along with strangers?

Sometimes they get really excited when somebody new comes into our house but at times they’re a bit wary and Muffin barks at them but all in all she’s okay with strangers!

I’m not sure about Muffin – she did put on weight and she is now in diet doggy food so she’s skinny again but Persie weighs 2.8kg. I know this because when he went to the vets after eating chocolate he weighed 3kg then after making him sick he was 2.8kg only about 20 minutes after!

Hehehehehe. Our step-dad hates it when we do but we have bought Muffin a Manchester United jumper before and this awesome superman costume! 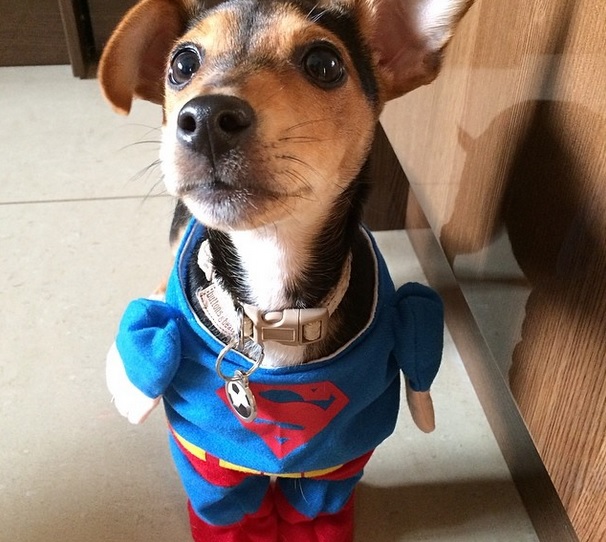 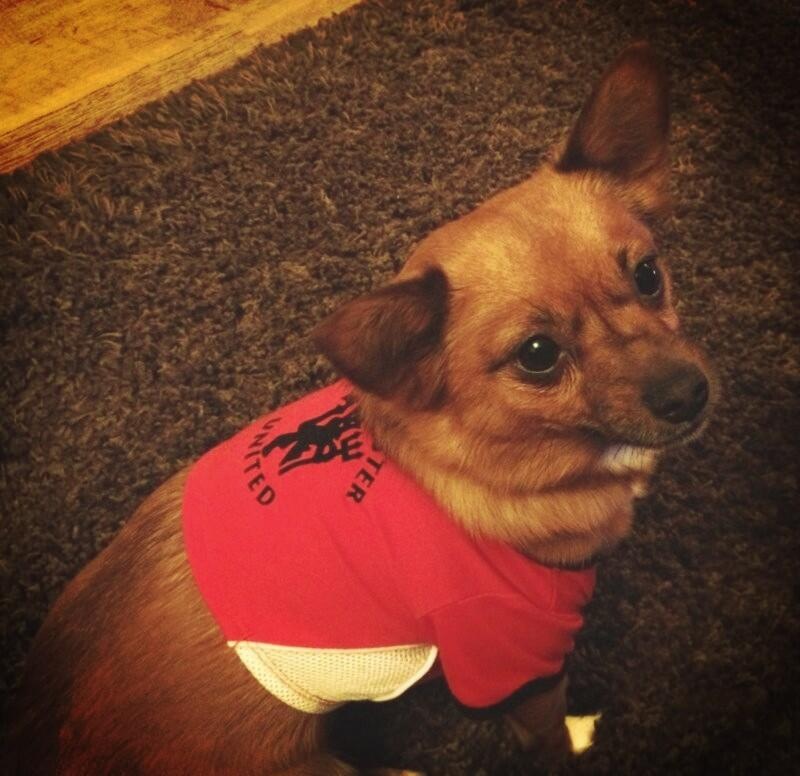 13. Have they ever tried to run away?

Muffin once made a run for it when it was snowing and my step-dad was running down the street chasing after her! And Persie made a run for it before as we didn’t realise he was in the porch area bit that we have and he ran! Luckily Ella was super quick and picked him up.

14. How did you come up with their names?

We run a family bakery and Cupcake sounded a bit awful as a dog’s name so we decided on Muffin. As with Persie, we are Manchester United supporters so we named him after Robin van Persie. And we sing “Ohhhh Muffin and Persieee” instead of “Robin van Persie” what the fans sing haha!

Silly question! They are both part of our family now and I couldn’t imagine living without either of them!

Do you have a pet? Why not do this TAG and share their story too!