Quite a while ago I bought a couple of waxing products to use at home in the hope I could save some money rather than going to a beauty salon and spending a fortune. I bought the Acorelle Hot Royal Wax and the Acorelle Ready to Use Strips (Face).

I normally use hair removal cream for my top lip, however I haven’t found a natural version and I’m not keen on the ingredients in the mainstream version so I was looking for an alternative and thought the Ready to Use Face Strips would be perfect. Acorelle’s cold wax strips are the first cold wax strip to be 100% natural, organically certified & hypoallergenic. They are enriched with moisturising and soothing organic beeswax and aloe vera, are paraben free & claim to be effective on even the shortest of hairs giving you long lasting results for up to 4 weeks. 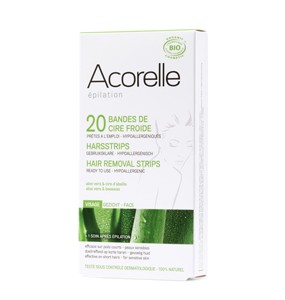 The strips come as doubles so you warm them up between your hands & then peel them apart to use. I tried using just my hands but it didn’t seem to warm them up enough so I resorted to using my hairdryer! I could see the wax was warm as it went slightly see-through however they didn’t seem to be sticky enough. Now obviously upper lip hair isn’t the longest but it just didn’t work as well as I had hoped. Also, as they come as doubles, the other strip gets cold while I’m using the first strip so it’s not really that great. It comes with sweet almond oil to gently remove any “residue” and to soften the skin but the wax isn’t sticky enough to leave residue. I’m not sure if by using the hairdryer I’m warming it up too much but I can’t see that being the reason as wax is always better hot, surely? The only good thing about these strips is that you can go over the same part of skin twice but it does take a lot of effort. It shouldn’t be this hard to get rid of my lady ‘tache! So unfortunately..its not a winner for me. However…

The next product I bought was the Acorelle Hot Royal Wax which comes as solid wax in a tub along with a spatula. You heat up the wax and this wax is especially for underarms, face & bikini line. The wax is also 100% natural and certified organic.  I had been having bikini waxes since the end of 2013 however it’s pretty costly at £25 a pop and it bloody darn well hurts! I can tolerate my bikini line, that’s fine but it’s the rest that’s painful…if you’ve ever had a wax, you’ll know. If not, be prepared! Also, attempting to do it myself means I can do it in the comfort of my own home. 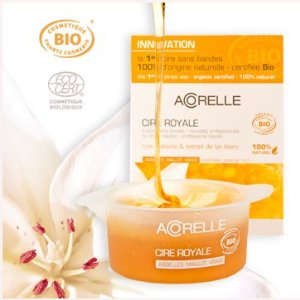 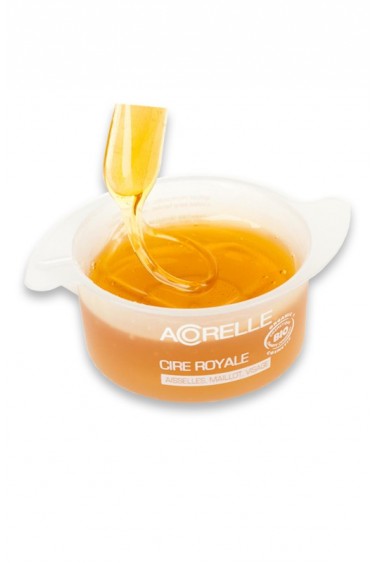 So I read the instructions; put the pot in the microwave for around 2 minutes (depending on your microwave strength) and stir occasionally. It started to melt in a circle in the centre and the I just had to keep stirring until the whole tub was melted down. I tested a patch on my wrist to check the heat – I would definitely recommend doing this as it was SO hot, it almost burnt my wrist so imagine if I had put it on my bikini line!

I waited for it to cool and waxed my bikini line. I won’t go into details because you don’t all need to know that but it actually worked really well. The wax was easy to remove, it did hurt but not that much as I had the control over it. It removed almost all of the hairs and didn’t leave much residue either. I use almond oil afterwards on any stray bits of wax that had stuck to my skin and also to soothe the redness. The only issue I had with this is how messy it was! I ended up with wax on the soles of my feet and my carpet and the pot was covered in wax. However, I have gotten a bit better as time has gone on!

Another great thing about this wax is that it is perfect for my upper lip. I need the smallest amount and it gets the job done in less than a minute! So quick and easy. I do get a few little tiny whiteheads in the days after I wax my top lip but they go after a day or so and I’ve noticed this with other waxes too so it’s not just Acorelle…does anyone know why this happens?!

You can buy the Acorelle waxing products from MyPure.

Have you tried any natural waxes? Any that you would recommend?

*I bought the wax strips with my own money and I won a voucher on MyPure’s Facebook page in a competition back at Easter last year which I used to buy the Hot Royal Wax….yah I’ve had it a LONG time…hence the crappy photos.