My skin on the whole is pretty good, I get a few spots a month and blackheads are a constant battle but overall, it’s not that bad. However, I am always looking for something to give me clearer skin (I know, I know I can drink loads of water and eat healthier, blah blah blah) but I was recently contacted about a tea that is supposedly good for your skin; Artichoke Tea*!

Apparently artichokes have been eaten for decades for their beneficial effects on the digestive system and new research has shown it could have an ability to slow down our skin’s aging process. Scientists have looked at the effects cynaropicrin, a bioactive compound in artichoke, has on skin cells & they found two main effects; reduced inflammation and the production of oxygen free radicals were lowered meaning it’s great for your skin! 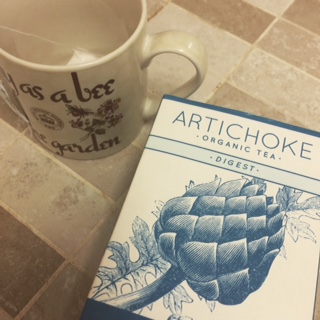 I’ve never tried artichoke before, nor have I tried artichoke tea so I was a bit apprehensive to try it but it actually tasted quite nice! I can’t put my finger on what it tastes like as obviously I have never tried artichoke before so I have no idea if it actually tastes like artichoke…but yeah it’s nice and I would buy another box. It is quite sweet but it has an earthy taste to it as well, I guess quite similar to green tea. As far as how it has helped my skin, I would probably have to drink one cup every day for a while to see any drastic effects but I do like to drink this if I have any nasty spots to calm inflammation and also if I’ve been out for dinner and had a starter, main, dessert and the rest and I’m really bloated, I like to drink one after to help digestion.

You can buy it from Holland & Barrett online or in store along with a load of other flavours from Natur Boutique. A box of 20 teabags costs £2.99 which I think is a good price and H&B pretty much always have Penny Sales or deals on.

Have you ever tried Artichoke Tea or would you?